The second painting in the series about "refugees" is about the situation when "the refugees" from the first painting ended up in a sort of parallel world. People who have fled can end up in a kind of strange isolation, a sort of no man's land, while they want to have arrived in a 'country'. The so-called host country. But that instead of the hope for new opportunities often gives many obstacles stress and a lost feeling.

First, this group of people from the painting did loose a lot. The safety of your own home base. Everyone else has his own story. But the journey away from the horror was often a harsh trip. The flow of refugees divided and people ended up in camps. Many refugees survived tent camps. Sometimes from one location to another. The flow of people continues. Is scattered, divided, accumulated and hunted.
The people in this painting have found each other here, the shared past, the safety, warmth and shelter. This mother still has her children, they are close and lean on each other. That can be different. But they only have each other. How should that be? The atmosphere of home, they have together. But the environment is strange. And many people, as this painting shows, live their own lives. At first sight different. That daily life continues. And unseen, the refugees have been absorbed in isolation, in these not even hostile lives of strangers.
What can also go different. Read the news, but the online cries .. interpretations, explanation of the situation of the refugees. 'Men' thinks tthey know. 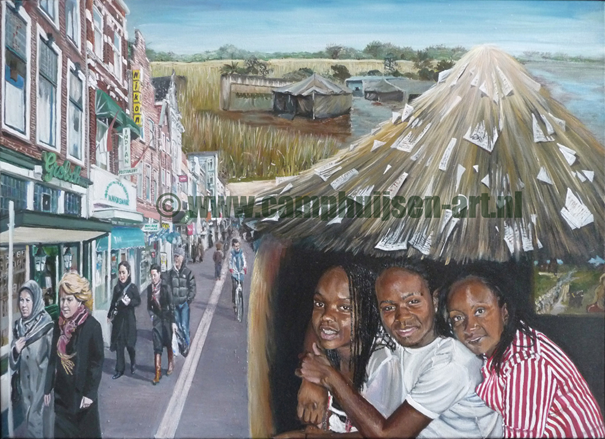 But, a tormented person who hoped for a safer life must go through a very difficult period. There is separation, simultaneous and ignorance of each other's story. People often look straight ahead in front of each other, one says everything, or one is silent. It is judged.
Lost is this painting. What is lost here? Also what has been lost is not forgotten. The concept can be seen in more ways. Can these people find a home here? Where else is that? One must agree. People say there is no place, go away. Distrust. Others are hospitable and curious. House hunters say they have to wait in turn.
What do you pay attention to? On the differences or on the agreements?
What is known about history, history, which people in the 'receiving' country unreal occur. Life courses, of which the cause of the drama is concealed, covered in dark terms. For the fleeing fellow man, too painful to give attention. And sometimes, not knowing, or the truth to whom may be told comes another piece of story forward. Or a life story, where a truth is omitted. For they knew no other world than the world where they were born and raised. And the opposite applies to the "receiving population as well". There too it is not clear what "the truth" is. Seems like it sometimes said unbelievable. People understand one another so often only from their own world experience.
What a gap there are to bridge. What makes a difference understandable and communicable. I recently heard of a man who for years had not come through the paper mill because he had fled as a toddler and had come to another hostile country with his father. Separated from his father and raised hostile in a foster family. And only dragged from hot to later and fled. He had no ID. He was a taken-away toddler without a homeland. How could he make himself credible? He did not even speak the language of his birth country where his fellow villagers had once been murdered and his father had taken him away.
And, so does the painting, what is a lot of time lost on the whole paper mill. Reports documents, statements, proofs. And money. It also costs money. Refugees sometimes say that the entire refugee status alone is traumatic. Let alone which trauma was left behind.
And once did I hear a man say that as an ex-refugee he is strong for refugees now: Traumas? What is that? They do not exist. We just have to continue. We must break our strength and use it to bring our talents to the fore and thus acquire a rightful place. During my training I learned a lot about trauma and how people go into therapy to recover from their trauma. This refugee did not know anything about it.
Worlds, worlds of difference, how do we not lose time and do we make it into a unity ?! How can these people pick up a new life and finally build it up? Better than if this intermediate stage is so oppressive.

The painting "Lost" can also be seen in Bilthoven.


On display in the "Life Course" exhibition until the end of October.
October 2 at a quarter to eight I give a lecture about my work there. And I discuss with visitors about their reactions to my work.
https://www.camphuijsen-art.nl/kunstwerk/15471397_Verloren.html
https://camphuijsen.exto.org/expositie/260692283.html

You not only translate your epic painting, Lost, into an incredible window with which we may view and draw our own personal feeling on this subject, your blog is a testimony to the written descriptive narrative which you portrayed!